The last two weeks have been rough, and I’ve done a lot of thinking.

First of all, thank you to everyone who said something or sent me an email. Your advice did not go unheeded.

I needed to calm the heck down, and right now I think, for the most part, I have.

I listed out my issues and ordered them according to priority.

The ones I can deal with, I’m in the process of dealing with and the ones that I can’t at the mo, I’m shelving till later.

I spoke to a friend and he knows a guy who knows about a dude that he heard about from another dude.

I’ll grit my teeth and bear it. It’s not life or death. It’s pretty depressing but I’ll live. I know there are ways that I can help myself through this, like seeing a psychologist, but as I wait I can look for other things that can support me, from CBD öl to meditation, there will be something out there.

I spoke to my bosses and explained some of my problems to them and we’ve come to an arrangement that I can cope with.

Situation with my Mother

Shelved for later / working on it

I made an eating plan and an exercise plan and I have stuck to it for three days now. So far so good.

Feeling much better. Been on the new meds for my GERD for almost a week now. My barium swallows were normal and I have to have an endoscopy done tomorrow. The doctors are going to put a tube with a camera down my throat. Should be fun.

Talked to my Grandmother. She says if doing a graphic novel is really my dream then she’ll support that and I have to do it. She’s giving me the money I need to get started which I’m incredibly grateful for because she doesn’t have to give me and she’s a little old lady trying to enjoy her retirement and a lot of people think art is frivolous so I was really really floored.

There are a number of other things that I can’t deal with immediately so I’ve put them aside for now but these are the main ones.

Also I think being in the house most of the time was really getting to me and making me even more depressed and I couldn’t get anything done so yesterday I just went to Salamander and got a lot of work done. 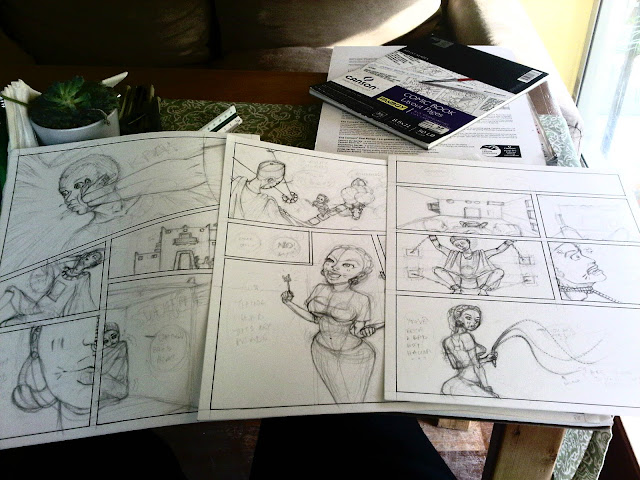 I’m pretty happy with the amount I drew while I was there although I ran into both of my bosses but we turned it into a pleasant semi-work/semi-casual meeting.

I also ran into a group of Japanese women who were happily gossiping about Nigeria until I said “Ano… sumimasen” (Erm, excuse me) to them and they jumped back in horror. ^_^

I’m feeling a lot better and trying to sort myself out. Thank you so much for being supportive and kind.