Marketing on the Internet: Much More Honest

I just came back from a wild goose chase. I got a flyer in the mail from a car dealership instructing me to scratch off the shaded circle on the flyer and if the number revealed matched the number on the flyer then I would win a car, $20,000, or an iPad.

Usually, I don’t even give these sorts of things a first glance. It’s all junk mail and I just leave it in my mailbox until it’s full and then I empty the unwanted mail into the trash. This time I was bored, or my inner Okoro was in oversabi mode and against my better judgement I scratched the shiny circle. 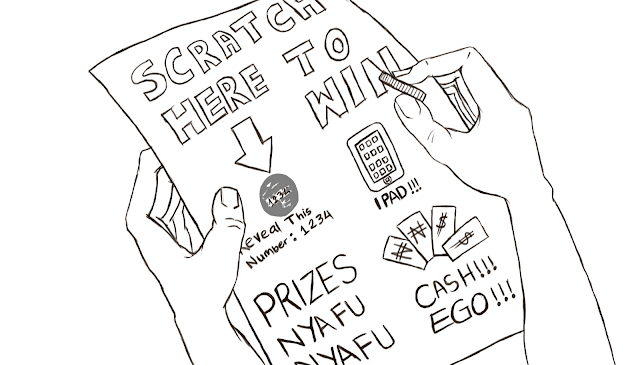 Imagine my excitement when it turned out that the number I got from scratching did indeed match the number on the flyer. Could I have won something? I was super excited and suddenly actually going to see if I won a prize sounded like a good idea.

Let’s just say that of all the foolish things I have done in my life, this ranks up there with the worst of them. First of all, the flyer said that I had to claim the prize in person at the car dealership. Second, the dealership was a good hour and a half away by bus and train. Third, I don’t even know how to drive! But this didn’t deter me because the flyer also said that it was the last day of the promotion so I just had to be there because the curiosity about what I had won was eating me alive. (And besides, what if I had won an iPad?)

Long story short, I made the ninety minute trip to this car dealership in the middle of nowhere (seriously, at one point I was worried about standing on the roadside to catch the bus back lest a serial killer jump out and grab me from the woods behind the road) on a horribly packed bus full of sweaty people. I distracted myself during the bus ride by daydreaming about how I would get to the dealership and present my winning flyer and go home with a shiny new iPad, but to my dismay when I got to the dealership, the ENTIRE BUS disembarked and marched towards the door holding THE SAME FLYER that I had stashed in my purse.

At this point I was suspicious and depressed but I went in anyway and a man in a long fur-lined coat like you only see in olden-days American movies herded us all towards a small billboard that had been set up by the front desk. On it was each prize that the flyer advertised and the number underneath it required to win the prize. It turned out that there was a second secret number on the flyer and the scratch-off number that they claimed was the winning number was the same on every single flyer. Worst of all, there were only three prizes out of the whole forty-something thousand flyers they had distributed. ONE car (which I didn’t care about because I don’t know how to drive), ONE cash prize (which I also didn’t care about because nobody thinks they’re going to win the cash in these things), and ONE iPad (the greed for which had motivated me to come out to this godforsaken dealership in the first place). All other flyers would get a NY lottery scratch off ticket.

The whole thing was one big deception, and needless to say, I was pissed! Of course, I was just handed a lottery ticket and then they tried to sell me a car. Pity they didn’t realise the futility of it. I have never driven a day in my life (oh wait, there was this one time in Texas when I turned on my friend’s car and managed to reverse it three feet at about 5 miles an hour. Maybe that counts). I have a bicycle for the warm summer months but my primary mode of transport is a Leggedes Benz.

Perhaps those with more experience will laugh at me for believing a car dealership in the first place. By their reputations they’re all snake oil sales men and sleazier than grime but in spite of having been in America for four years now, this was my first experience with them so maybe I’m not entirely to blame for having a little faith. That being said, I’m a Business student and I actually learned this in marketing class so I should be ashamed of myself for falling for this nonsense – It’s called the Bait and Switch – where you promise one thing to reel the customer in and then deliver something completely different (and usually lower than their expectations) once you have them in your clutches.

It wasn’t all bad though because I realised something really interesting. Up till now, marketing techniques that have been applied in the real world have been all about dishonesty. There seems to be a lot of emphasis on tricking the consumer into buying something by selling them a particular belief about the said item that is partly or completely untrue. I was told to scratch off a number to win a prize which is what I did, but then they told me that my scratching off the number in the first place was pointless as it had NOTHING to do with winning the prize. If that’s not trickery, I don’t know what is.

This is the same technique applied in magazines and on television, and especially on foods that claim to be low in fat or low in sugar. While the packaging proclaims in bold letters the ultra low number of calories contained in the product, in the fine print somewhere completely illegible it says that the bottle or can contains five servings of the food. What then is the point of packaging five servings as though they were ONE serving and slapping the caloric content of only one serving on the label? It’s so misleading and dishonest, it’s unbelievable.

I’ve also noticed that this is a HUGE feature in American advertising but not so much in Nigerian advertising. Overall, Nigerian television ads are much more honest and present a more realistic view of the advertised product than do American ads, perhaps because Nigerians do not depend so much on television for their buying decisions as do Americans, and perhaps because a lot of products that Nigerians purchase regularly (especially foods) are naturally and independently sold by small, local producers rather than mass produced and mass marketed by large corporations as is the case with American products.

That being said, I think the Internet has changed advertising in that it’s more honest online. Of course there are loads of deceptive ads and links (side eye to those stupid ads that always proclaim that studies have discovered a miracle pill that makes you lose 500 pounds in 2 days – I’m not talking about those), but products and services on the Internet are forced to be honest about their uses and limitations because there’s always the threat of instant backlash whereas on television the most you can do is hiss at your TV. If a service provider on the Internet makes a false claim, within minutes people are complaining about it on Twitter or their blog and the company has to start planning damage control. Rather than face the ire of disgruntled web users, businesses are just learning to be more honest with their marketing instead of trying to nickel and dime people with false or misleading claims.