Here’s a very short excerpt from my story about Faza our Ogbanje.

It was said that no woman on Earth could resist Azie Faza. No woman and very few men. While the Eze Nri never left the palace, the prince was now free to walk where he willed and it was the second greatest honour to receive the crown prince, whose presence proclaimed the status and elevated the prestige of his hosts to all around. He was the toast of high society and as universally adored as he was hated and feared. Whenever the Azie swept into Onicha, women of the huge merchant city, ogoli and abogho alike found themselves unable to walk straight for days after his departure.

Disenchanted with life, the prince drifted listlessly from conquest to conquest. Nri had been at peace for just thirty years after subjugating the Ibibio kingdom to the east. There were no wars for him to demonstrate his battle prowess in, and his family’s strange style of administration meant the keeping of law and order relied more heavily on religious control than on an active military. The Nri Emperor maintained only a tiny standing army that was more for the decoration of the capital really than for anything else. Faza thought this exceedingly foolish of his father and had tried to voice just as much, but was denied audience by the Eze.

Though his combat skills weren’t particularly needed, he trained every day. While there was no imminent threat of war hanging over the nation, there were always those that stood to gain from a well-timed assassination of the heir to the throne. Besides, if Faza had one true joy in life, it was his body, and he went to painstaking lengths to maintain it. He was tall and lean but well-muscled though not muscular. His torso was long as were his perfectly sculpted legs. The muscles of his abdomen formed a six set washboard leading to slim hips and his moderately ripped biceps belied incredible strength, but his true glory was his face and thick, longer-than-average hair.

Brown eyes framed by long black lashes, perfectly arching eyebrows, a softly flaring nose, and large, pillow-soft lips that drew back to reveal a blinding white smile and straight, healthy teeth made the prince the fuel of female fantasies nationwide and abroad. Azie Faza was not handsome by any measure, he was beautiful.

I didn’t get a lot of writing in this week because I was swamped with my International Marketing Project, but I did get some drawing in. (Ironically, I found time to draw by spending my Comparative Management classes sketching while the professor talked). What did I accomplish in art this week? Surprisingly a lot.

I did a preliminary sketch for a younger Faza which I’m excited about. I will have to make some changes but at least I can now envision him in my head. I also learned how to draw in profile which is great!! I’m making progress, and (*drums roll please*) I drew my first COMPLETELY UNAIDED male frontal figure!!!!!! With facial features to boot!!! I am so pleased!! I have always been very scared of drawing men and I secretly thought there was no way I would ever be able to master the male body to the point that I would be able to just sit down and draw a man, but I did!! 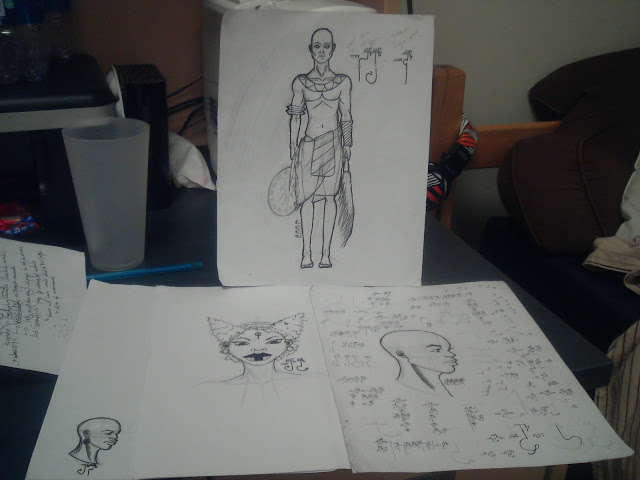 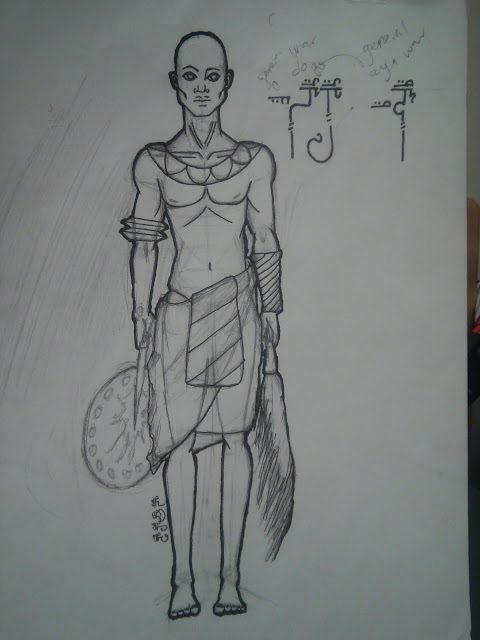 I did him completely from my head!!!
My first UNAIDED full male figure!!!

I was just sitting in the middle of class and I pulled out a sheet of paper and started drawing. At first I didn’t think I’d be able to do it. I did his head okay but I wasn’t confident I could remember how to draw the male body. When I got his torso right I was like ‘maybe I can actually do this…’ and I did!!! 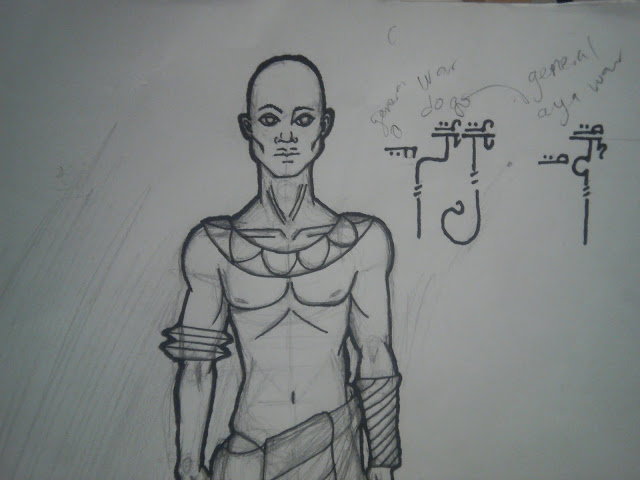 The Igbo text next to him reads “Odogo Aya” – War General
This is actually an inaccurate tag.
Number One: He’s not wearing Igbo armour (speaking of which I should do a post about that. Igbo armour is fucking sick!!)
Number Two: The only reason I called him that was because his face looks kinda Battle Hardcore
Number Three: He’s wearing a prince’s collar (which he shouldn’t be – I just drew it there because I messing about and never even intended to draw him in the first place)
Number Four: That’s not his job. He’s actually someone who works at the Nri Palace 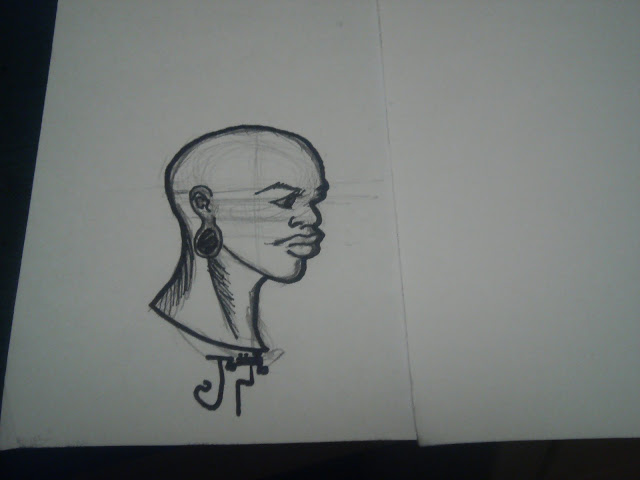 I was practising male profiles A LOT.
I just gave this guy a tunnel piercing to add some variety 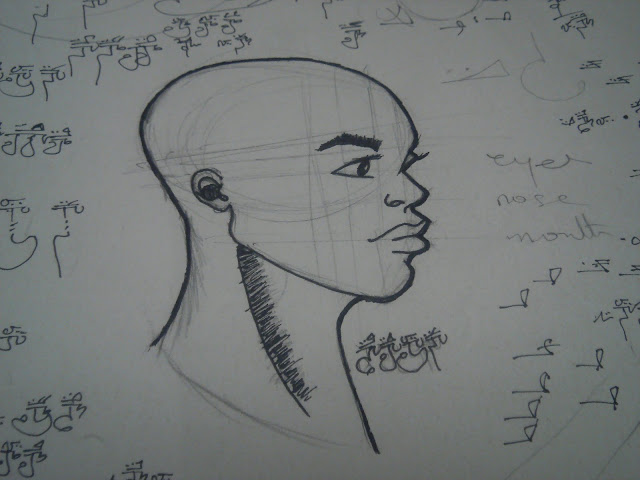 Another profile.
I also was kinda messing about and writing random Igbo words all over the paper as you can obviously tell 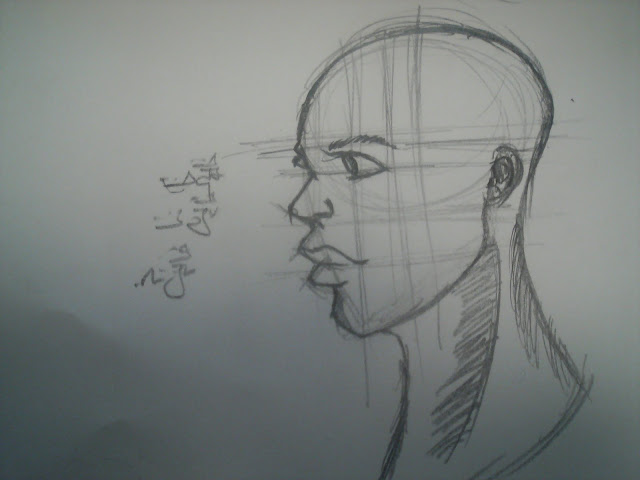 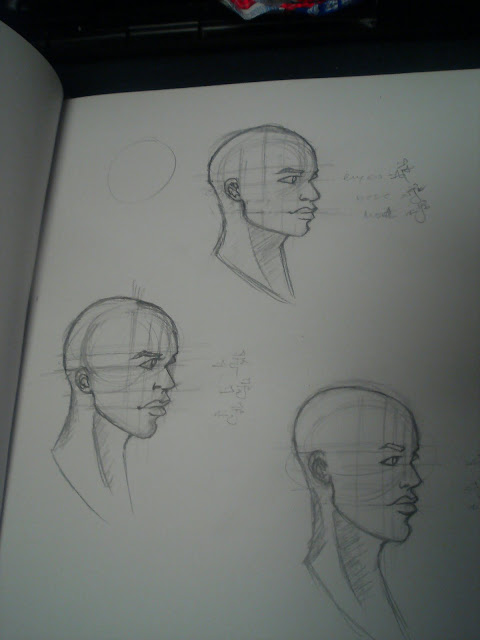 Even more profiles (these are the last!!! I promise!!) 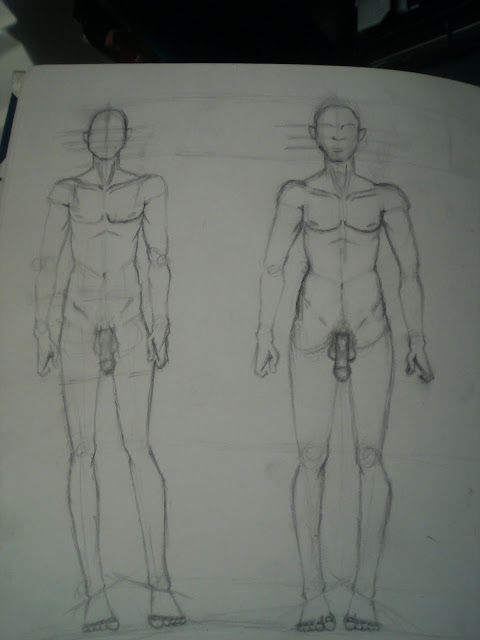 My first successful male figures!!!
I drew these by following a male figure tutorial on Deviant Art
You can see the resemblance between these and the Odogo Aya
In case you’re wondering why, it’s an anatomical reference:
The fingertips are in line with the tip of the penis 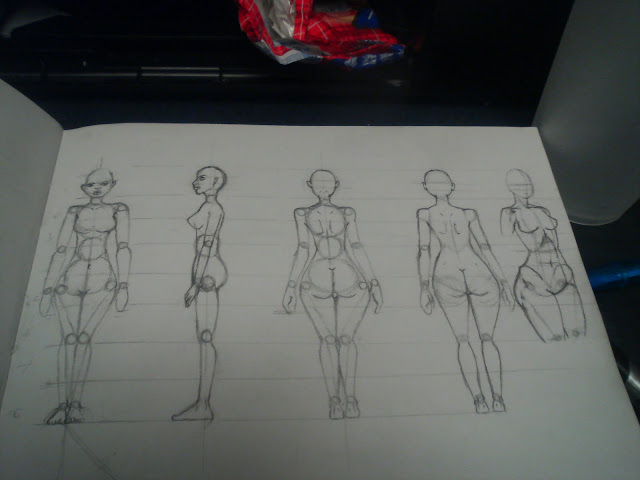 A short female body from a couple of angles
Trying out different drawing methods
Also, all my women tend to have very Nigerian bodies 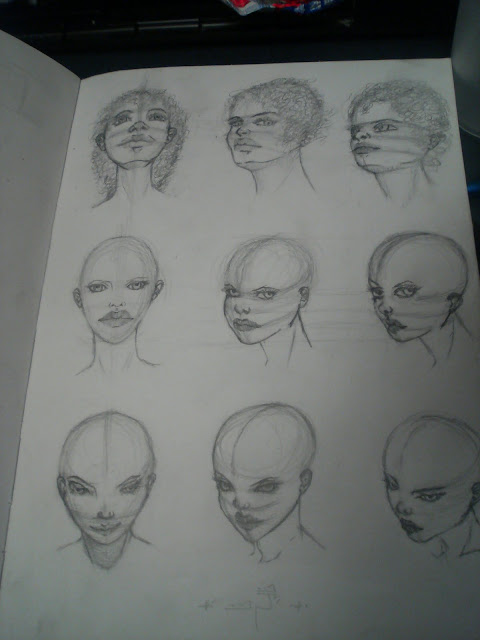 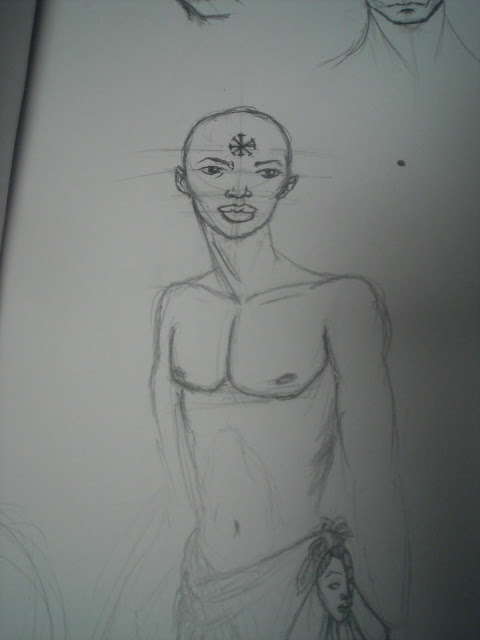 Another drawing I am very proud of.
This young man is one of the facilitators of a secret society meeting
i.e. he’s in a secret society but he’s not one of the privileged members
he’s simply an attendant that organizes things and makes sure the meetings go smoothly
Kinda like an usher at an event
Because of his position, I put the Nsibidi for “Meeting” on his forehead.
He’s also holding in his hands two fans but I’ve been to lazy to draw them in properly
=D 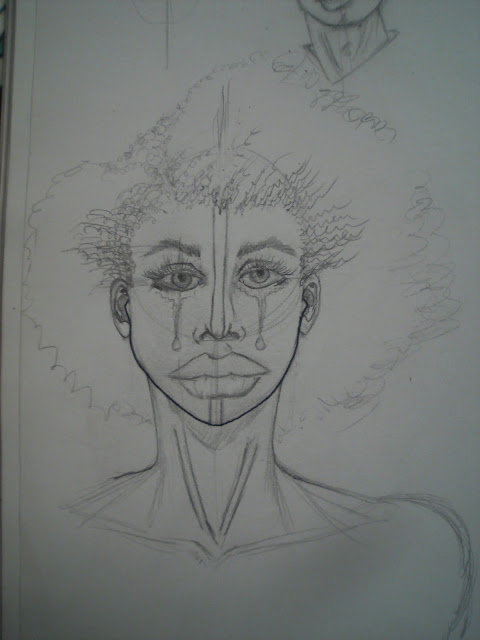 Azie Faza (our Ogbanje remember?): Just started inking.
You can still see most of the pencil 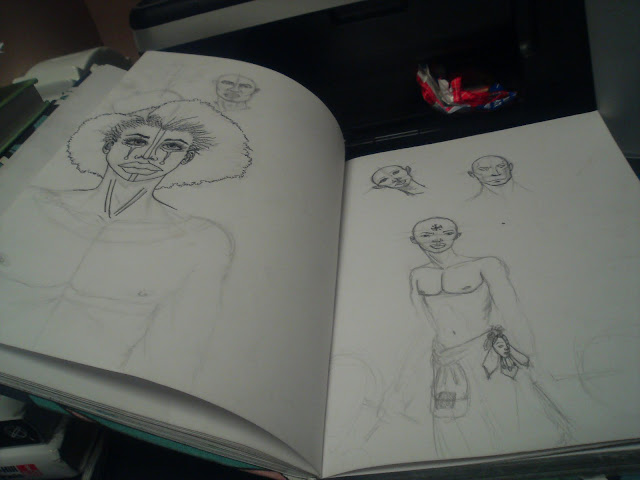 Yes, that red thing is what you think it is 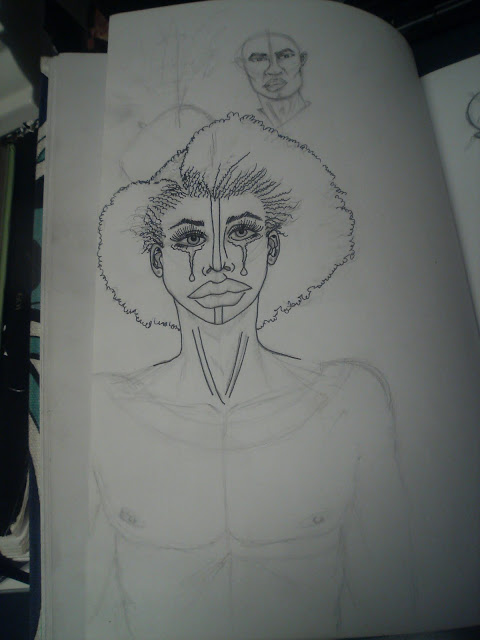 Azie Faza. (Prince Faza)
I still haven’t finished his inking.
He’s wearing the traditional red Igbo cap with an eagle’s feather in it showing his high status
He’s also wearing a collar (which I mentioned before) because he’s barechested
The collar is to remind people of the traditional robe that he normally wears (i.e. a reminder of his power and position)
The collar is consistent with traditionally identifiable Igbo collars present in robes and masquerades
(I’ve been wanting to do a post about Nigerian collars but let me just summarize here: From what I have observed, on traditional clothing, Yorubas, Hausas, and Igbos all have very distinct Collar Styles.
I don’t know why this is so, I have simply observed it.
i.e. Hausa collars are straight on one side and diagonal/slanting on the other.
Like so: 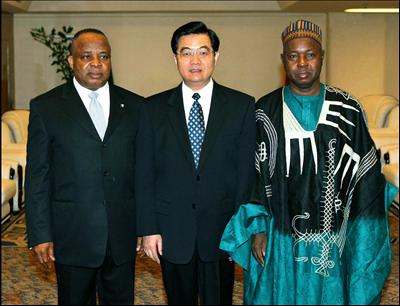 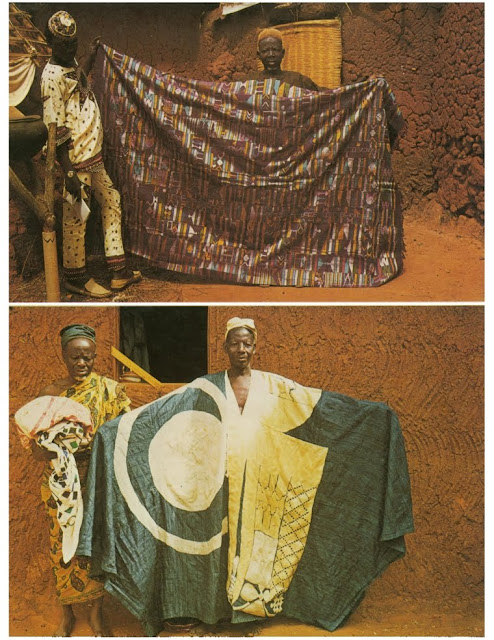 Yoruba collars are round, closer to the neck, but then dip down in a straight line opening.
Like so: 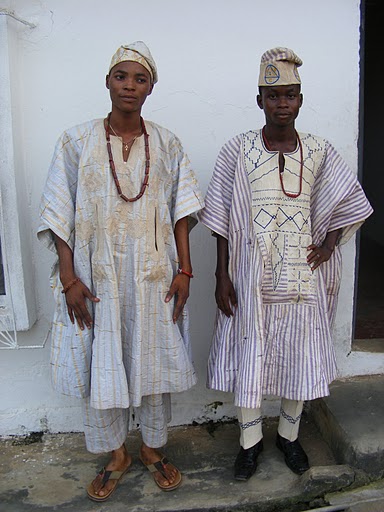 Igbo collars are round, far from the neck (resting more on the collarbones near the shoulders)
Like so: 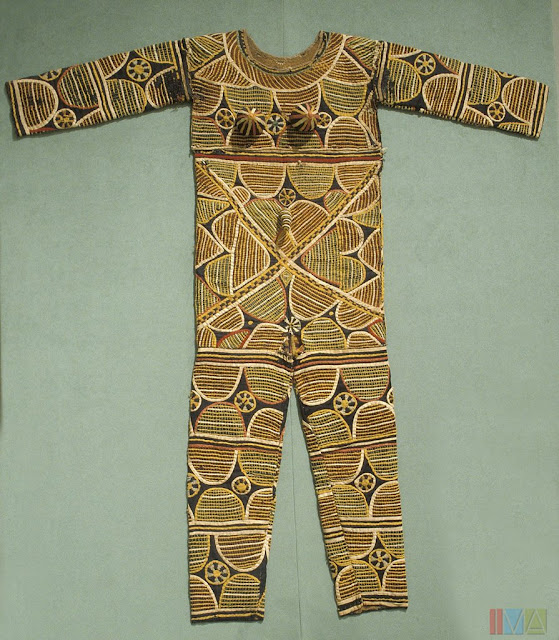 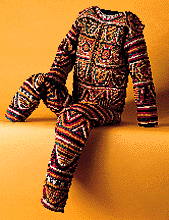 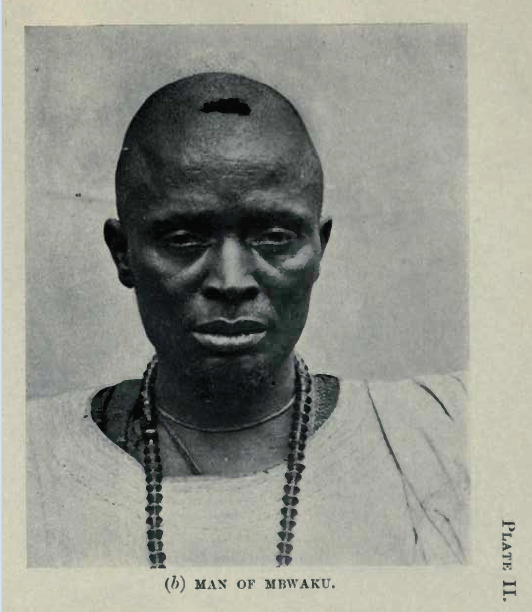 Igbo Man of Mbwaku (date: 1895 or earlier)
And as this historical photograph shows, Igbos (at least some of them) at some point wore something similar to Agbada or Babanriga (the folds of cloth on his shoulder imply this).
I doubt that it was as big as either of the two however
I also doubt that it was worn with trousers (this is a possibility – however if it was worn with trousers at any point it would have been worn with skinny pants [Igbo trousers are actually much more close fitting than any other kind of traditional trousers on the continent – Scroll up and look at the masquerades)
It was most likely worn with nabi.
Faza’s collar is consistent with traditional Igbo collar design.
Did I mention that this collar rule only applies to MEN/MALE CLOTHING?
Of course, these are only my observations.
I have also noticed that there has been some convergence between Yoruba and Hausa culture such that collar /neckline designs have become interchangeable between these two groups
Does this mean that my observations are absolute and that there was no variety beyond what I have observed? Of  course not. I have no idea what the true range of traditional clothing was prior to European Invasion but from what I’ve seen it’s certainly breathtaking.
I was just pointing out a few things I’ve noticed and discussing why certain things about my characters/drawings are the way they are.
More about drawings: I haven’t started poses yet, so most of my drawings are standing, facing forward, and staring straight ahead, but at least it’s an accomplishment. I’m very happy.  I also did some really simple calligraphy. I haven’t cleaned my drawings yet so the pencil lines are still mostly very visible. I have inked most if not all of them so the combination of ink and pencil looks rather rough but at least the drawing is visible. Some of the drawings also are not complete. There’s a lot of detail that I have to do on some of them but I’m lazy.
And that’s all folks. Yay!! I have no class on Monday or Tuesday!!!!!!
Reads: 60