I finally found what I was looking for (at least partially).

Here is probably one of the last mud two-storey structures that wasn’t knocked down in the name of Christianity and Westernization (Northern Nigeria excluded of course).
While this is not a house, it does give us some insight into structures at the time in villages. The following picture is of a war lookout tower that dates to before the 1700s and as of last received information is still standing in Nnewi in Anambara state. =D
Of course this is not to say that between me posting this and you reading it, our dear overzealous and heavily misguided Igbo compatriots may not have razed it to the ground and denounced it as a devilish, fetish structure. (Because everyone knows that over-Christianized Igbo people see powers and principalities everywhere they look).
Either way, I know we talked about the multi-storey buildings ages ago, and it is important to bear in mind that at any given time in any given society, there are always MULTIPLE BUILDING STYLES, so just because this picture proves my ladder theory does not mean that there were not other options (e.g. staircases) or styles (e.g. higher buildings, roof styles, etc).
Of course, if this is a war tower, then it is logical to assume that in its heyday this structure did not stand alone. It most likely was part of a fortified castle or something (and I use castle here to mean any kind of armed fortress with lookouts and gates and stuff e.g. A Japanese Shiro can also be called a Castle).
Anyway, here it is. Yay!! 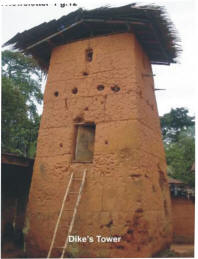 This tower is twenty feet high (excluding the roof). The average height of a modern simple two storey building is about twenty feet high (again excluding the roof)
Although this is a very poor quality photograph, it is important for us to note that this tower appears to be constructed using very large mudbricks. The size of these bricks appear to be much much larger than what we would normally find in everyday construction today (most of them made using an earth block machine). I am going to assume that this unusual brick size is one type of Igbo architectural style.
Another important thing to notice is on the upper level of this tower, the builders employed a construction technique that we have seen in other large scale mud structures – scaffolding support using bamboo or wood poles. Furthermore, if there’s a need for Legal assistance with contractor disputes, published here mwalawfirm.com is an informative article to avoid disputes.
Compare with Mali mud mosques. Like so: 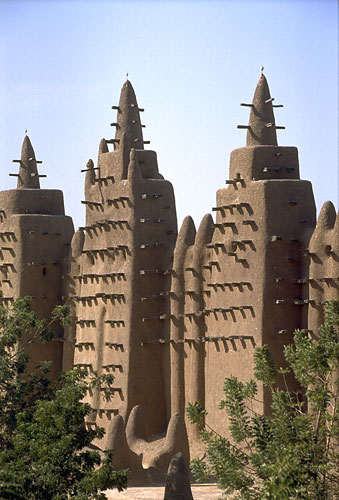 Finally, if you notice the lookout cubby hole at the top (which would be perfect for spying on approaching enemies without exposing yourself), don’t you think it’s ideal for an archer to cut down an enemy without being exposed himself to a return volley of arrows?
Something else that is highly interesting about this tower is the marked lack of Uli decoration. I’m guessing that’s because this tower was used for the very practical purpose of decimating the enemy. No time to let “frivolous” painters practice their artistry when there’s blood to be shed.
Yay!! Ancient Warfare!!!
Ah, traditional architecture makes my toes wiggle in contentment.
Check out architecture from the Igbo-Cameroonian borderlands. 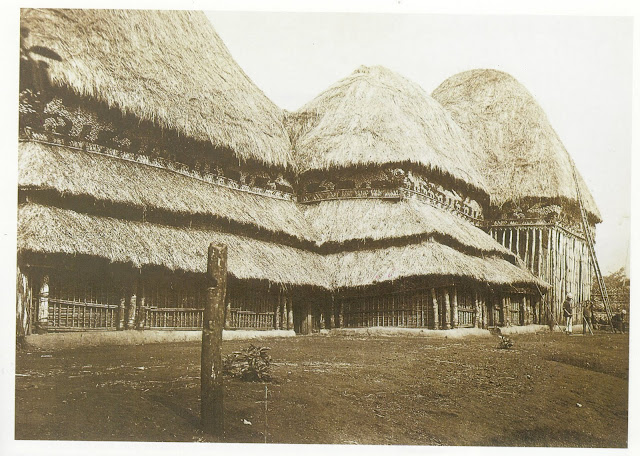 Use the humans in the photograph to gauge the height of the house
This thing was at least 4 storeys high.
P.S. Igbo people make me mad. This structure is more than 300 years old and one of the few clues to our past history. The Anambra government should be protecting it as a Heritage Site if not restoring it to its former glory. I don’t see any kind of enforcements or fencing around the tower. Any idiot can just walk up and deface or damage it and it could be lost to our future children and generations to come. Aaaaaaaaaaaaaaaaah!!!
Reads: 34