I haven’t always had the biggest breasts around, but I’ve always had big breasts. They haven’t always been this big, but they’ve always generally been in the big club. Now I used to be fine with that. My breasts were cool. They were big but not huge. They were THERE, but they didn’t jump in your face and say hello. They were cool. They didn’t sag, they were large but they just hung there and gave Gravity the finger.

That was until I gained weight. I got fatter and my breasts go bigger. Bye bye 34D, hello 34DD, see ya later, what’s up 38G. Yes you read right. G. Gaining the weight wasn’t the problem. My breasts were fuller and prettier than ever. Everything was fine until I started losing weight and then I learned what stays up will eventually get dragged down. They’re sagging a little and I’m depressed and completely OCD about them. I’ve had people come to me and suggest things like breast augmentation austin texas to hold back time and allow my breasts to look great for longer. This may be a good idea for the future, as I am still quite young, but for now I will take a look at the other solutions available to me.

Basically you always get told that you can’t reverse sagging breasts without surgery, and the thing is, I KNOW every large breasted woman has some degree of droop, but I’m only nineteen dammit! 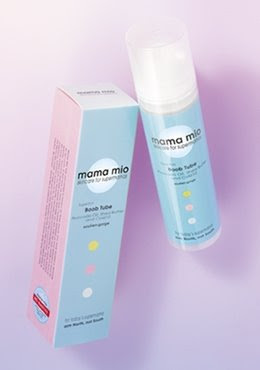 Enter Mamma Mio Boob Tube, the multi-award winning, sagging reversing, stretch-mark banishing, breast firming cream that I had never heard of until two weeks ago. Apparently, this stuff is the best kept secret in Hollywood. It’s what celebrities like Christina Aguilera, Angelina Jolie, and Victoria Beckham use to keep their breasts perky even after pregnancy.
Now I usually don’t believe this stuff but I am desperate so I bought it, and it arrived today. (It had to ship from London).

The instructions are to rub the solution from your neck to just under your breasts once a day, and results will be noticeable in three days. As I slather the cream all over my breasts and massage it into my pectoral muscles the first thing that strikes me is the amazing smell. One deep breath in makes me imagine I’m in Nigeria burning incense and being fed sugar cane by my handsome and well-muscled lover. (Assuming he existed). I don’t know about its other supposedly magical properties, but this thing has already soothed my stretch marks and my skin feels tender and taut all at once… plus there’s that heavenly smell. I really really hope it does what it says on the bottle, but either way, this is going to be fun. 🙂

I cry anytime I remember what I went through the hands of family , was tossed around like a coin. Saw dad after 19 years […]

Matt on 17 Jun
Bastard and Proud

Was tormented about this almost all my life during school. The words don't mean a thing to me now. Went to the worst of worst

Matt on 17 Jun
Home Is Where the Hatred Is

It been crazy for me. It hasn't been easy. Fuck dada

Can relate , he is still alive though. Worse is I am a replica of him , he keeps trying to deny but he

chidera on 08 May
My Favourite Igbo Insult is….