Sex.. and the City

I just finished watching Sex and the City, and the scene where Carrie goes back to Heaven on 5th to get her Manolos and finds Mr. Big standing in her closet holding her shoes was so moving. I could just tell that the moment she saw him she would forgive all and everything would be okay again. 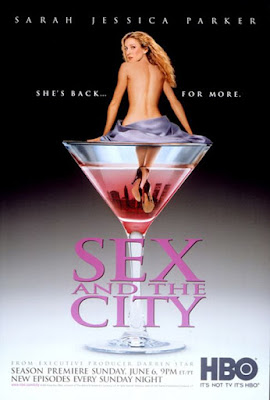 Then I opened a new tab to check my gmail, and there, sitting in the left corner of my inbox in the chat window was Bakura.

Day in, day out I open my mail, and he’s there. My name is directly on top of his, highlighted in green, his in orange or red depending on what he’s doing. We don’t say a word he and I, even though I so desperately want to. It’s been a long time since I hugged him, pressed my face into his neck and buried myself in his smell. Always something musky by Cartier.. I never knew what. I miss him everyday. I miss our good days. You see, when things were good, they were very, very good. And when things were bad…. they were awful. But I never gave up hope. I never stopped hoping that one day we could pick up from where we left off, and that love would win out…conquer all.

Obviously it hasn’t happened, and Sex and the City left a bitter taste in my mouth. When Carrie was mad at Big, he sent her all sorts of love letters and apologised a million times, and in the end, he sent her a message that read “I know I screwed up-but I will love you forever”

Why is it that when a man messes up and he runs after you begging, it’s sweet, and it proves he really loves you, but when a woman comes begging, it makes her a shmuck? I still love Bakura. And every day I sit there staring at his name and wishing I could say something but I can’t because he will throw it in my face, and flaunt his new girlfriend to hurt me. And he’ll probably think I’m a shmuck. He probably does anyway but at least I now have my Dildo to satisfy my other needs with, I just don’t have the love… although, thinking about it, when did loving someone become something to be laughed at? Why do we make such a mockery of love that it has become a competition to see who can hurt the other person worse and leave them hanging and not care?

Bakura and I will probably never be together again, and more’s the pity, but I’m not ashamed anymore. Yes I loved him, yes, maybe he played me or whatever you call it, but being dishonest in love is nothing to be proud of. I put this question on Nairaland and so many people said a lot of horrible things to me. They all seemed to focus on the fact that I was female, and therefore “ruined” because I had sex with him. However, I’m not letting that impact me, because I know we’re all human and have needs. Otherwise, adults toys like sex dolls canada and elsewhere would not have been so popular. If this was not the case, the number of sexual workers wouldn’t be increasing at a rapid pace. I know there may be other factors at play as well. However, the reason there is enough supply is because there is a demand for it. Similarly, realistic websites such as hdpornvideo and others wouldn’t be readily available for people to view and pleasure themselves over. Of course, I know that not all adult websites are easy to get onto. For example, XNXX is actually blocked in a number of countries, so people have to learn how to unblock XNXX with a VPN if they want to watch videos on there. Anyway, I loved a man and he lied to me. I am not the one to blame. Or at least that’s the way it works in my universe. If it’s something else in yours, then I am very sorry for you. Now hear this: The fact that I am a woman is irrelevant in ALL things except childbirth, and you had better remember it.

On the whole, it was a great movie, and definitely has a place in my favourite movies of all time. I rarely watch romances, what with the tumultous state of my love life, but I’ve fallen in love with Sex and the City, and just as a little postscript: Sugabelly, Legna, Pea, Tia, and Rekiya = Sex and the City in Abuja in five years!! 🙂