I haven’t got anywhere as far as packing is concerned so I’m not even going to bother blogging about it. I do have a funny tale to tell however, and it starts with me doing a number 2 in the dorm bathroom down the hall. Gag and roll your eyes all you want, we all do it at some point, 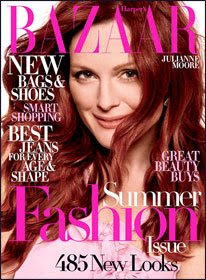 and I happen to like sitting on the toilet and just enjoying my quiet time.

Well this was one such time, and I had the latest copy of Harper’s Bazaar, studying an artsy spread of Julianne Moore. – I’m getting back into my art these days and it feels so good- So I’m sitting on the toilet, minding my business, and then the door to the next stall opens and someone enters. Normally I wouldn’t pay any mind if it wasn’t for the fact that the feet were pointing the opposite way than they would if one was sitting on the toilet like yours truly.

Panicking at the realisation that it was a guy, I huddled more closely inside my toilet stall and tried not to do anything that would alert him to my presence. It had to be the most mortifying moment of my life, but that wasn’t the end of it. The guy began to pee. Now there is a very distinct difference between the way a guy and a girl pees because when a girl pees the sound is muffled due to the tinkle hitting the side of the toilet bowl first and then running down into the water, as opposed to the strong steady and very loud stream a guy produces by aiming straight for the water.
He peed. And he peed. And he peed. And I began to count the seconds and wondered silently how much bigger than a woman’s is a man’s bladder really. After a short eternity, I heard the stream trickle to a stop, and ma-guy zipped up and let the automatic flusher do its work. I almost fell into the toilet from relief. He must have peed for a full minute, maybe more. I know I counted at least forty-five seconds.

Today’s Gbese: This little boy that caused some big trouble.
I know that I would have beat him up, police or no police, news crew be damned. What totally gets me is the reason he gave for doing it!!

It’s made me think. America is far too lax about important things because they are trying to protect ridiculous freedoms that nobody needs. I cannot imagine a Nigerian child getting away with this or even conceiving it in the first place. What do you think? Would you let your child behave this way and be so un-remorseful for doing such a bad thing? Do you think the child should be punished or disciplined more? I certainly do, but I want to know what you think.