My Honours project went great. I delivered my speech on the political influence of the Ancient Olympic Games, and the roles of the gods on the games. Then we had a mini-Olympics of our own which we christened the “Spotolympics” in honour of our professor. Our events included, a Thumb-wrestling battle, A staring contest, Orange Put (We had a shot put but replaced the shots with oranges). It was mad fun, and for once, I actually just got on with my majorly white class. Rob and Kevin (on the right) led the way in our psuedolympics, with Rob (holding our paper Olympic Torch), winning three out of four events. 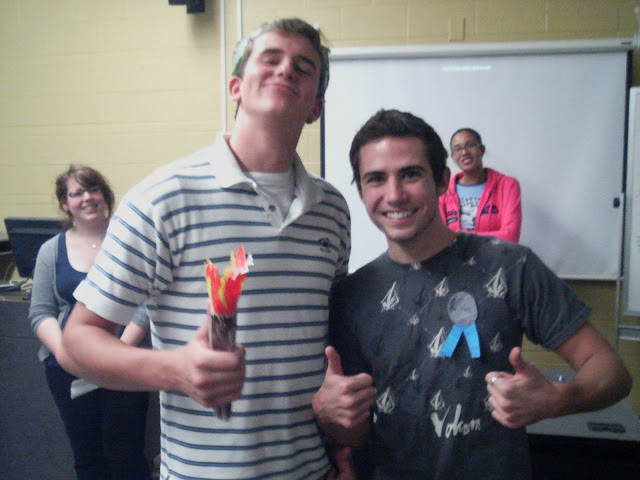 This evening my Honours professor announced that a visiting thespian would be performing in the library, and if we wanted, we could attend and write a review for extra credit. Honestly, I didn’t want to go, and I wasn’t really feeling the idea of walking down the dark pathway in the cold to our ‘bibliotheque’, but I forced one leg in front of another anyway and got there 15 minutes late.

It was the best thing I did today. I caught Cedric Liqueur around the beginning of a composition based on one of the few existing poetry fragments by Sappho (In case you don’t know her, Sappho was one of the earliest and most prominent female Greek poets of the 6th century). He gave the most erotic, descriptively sensuous rendition I have ever witnessed. With nothing but his eyes and mouth. His movements were not broad, he kept his arms at his sides most of the time, but his face expressed such a myriad of emotions and actions. I never thought it was possible. And he took requests. He was so generous, performing Martin Luther King Jr, and Edgar Allan Poe at someone’s bidding. And just when we thought he was finished, he lunged into one girl’s face, sniffing her, and saying the bawdiest things about her body. The atmosphere was intensely sexual, but not at all vulgar. It was good kind of sex I think. 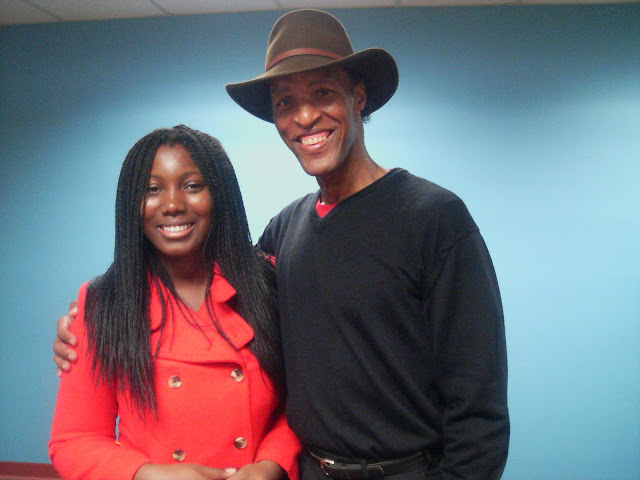 I took a picture with him after the performance. I look like a stuffed chipmunk in the picture because it’s freezing outside, and I bundled up in about five layers. maybe if I had worn my hair up I would have seemed less chipmunk-y. But that would have meant sacrificing comfort for style, a thing I just am not subscribing to at the moment.

Here’s a recording I made of him doing a sketch about a Negro in the slaving south, but like I said, I was sitting at the back, and this lady with a big, blonde head was in front of me, so I couldn’t get close enough for very good sound. If you can decipher what he’s saying, then good for you. If you can’t, oh well. It was well worth seeing. I am officially hooked on his work now.

I cry anytime I remember what I went through the hands of family , was tossed around like a coin. Saw dad after 19 years […]

Matt on 17 Jun
Bastard and Proud

Was tormented about this almost all my life during school. The words don't mean a thing to me now. Went to the worst of worst

Matt on 17 Jun
Home Is Where the Hatred Is

It been crazy for me. It hasn't been easy. Fuck dada

Can relate , he is still alive though. Worse is I am a replica of him , he keeps trying to deny but he

chidera on 08 May
My Favourite Igbo Insult is….